The Glastir Monitoring and Evaluation Programme (GMEP) team have been involved in the conversion of data produced by the GMEP project into practical metrics, maps and tools. These can be used by the Welsh Government (WG), Natural Resources Wales (NRW) and partners as they develop new policies and initiative to deliver a more integrated approach to managing our natural resources. A major ambition of the Environment (Wales) Act and Well-being of Future Generations (Wales) Act. We describe these below under the following headings:

GMEP provided data which cover all four ecosystem characteristics (extent, condition, diversity and connectivity) which are considered to help ecosystems become more resilient to pressures such as climate change. Increasing resilience of our ecosystems is a major ambition of the Environment (Wales) Act and Well-being of Future Generations (Wales) Act. We have explored how to combine GMEP with other data to help track improvements in resilience from a local to national scale. 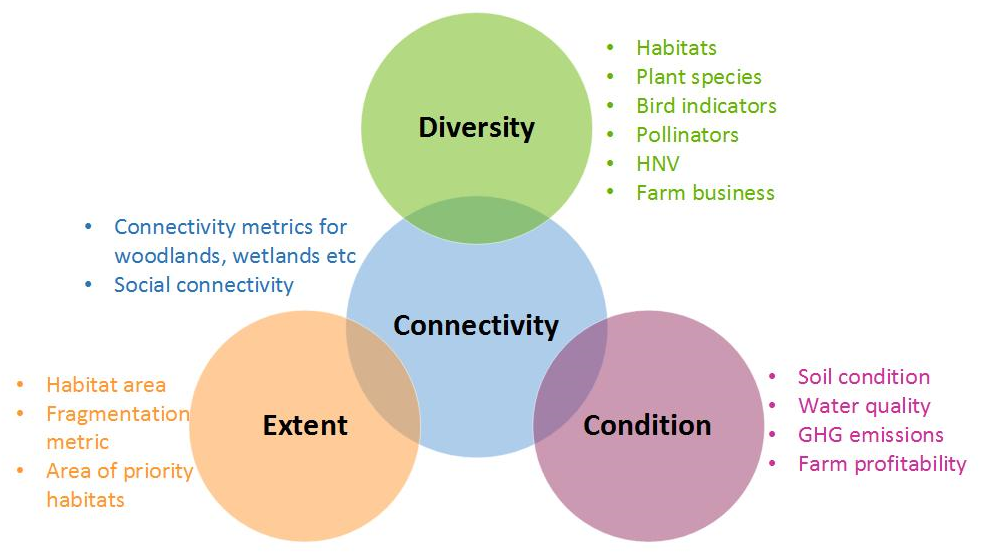 Wales has been used as a case study to help draft a step-by-step manual to help governments create National Species Accounts following the internationally accepted System of Environmental-Economic Accounting (SEEA). Members of the GMEP team were responsible for drafting this case study which used GMEP data extensively. This work is led by the United Nations Environment Programme - World Conservation Monitoring Centre (UNEP-WCMC), and the project is part of the Advancing Natural Capital Accounting project coordinated by the United Nations Environment Programme - The Economics of Ecosystems and Biodiversity (UNEP-TEEB) Office, UN Statistical Division and The Convention on Biological Diversity. GMEP soils data is also being used to explore approaches for developing National Soil Accounts.

GMEP is required to contribute to the reporting of long term trends in ecosystem health to support a wide range of other national and international reporting requirements. Two objectives for required reporting were added by the Auditor General for Wales in 2014:

To respond to these objectives, three additional outcomes for reporting were agreed for GMEP:

GMEP was tasked with providing a baseline for assessing the future impacts of Glastir. Future field surveys will provide the main evidence for actual change in the six original intended Outcomes. The impacts of Glastir reported here relate to evidence for changes in farmer behaviour and management practices as a result of Glastir payments derived from the GMEP Farmer Practice Survey of 600 farms. These data provide information concerning the three additional Outcomes requested by the Auditor General for Wales in 2014 related to actions by farmers to combat climate change, and to improve the diversification, efficiency, and profitability of farms involved in the Glastir scheme. To provide an early insight into likely future impacts on the six original Outcomes intended for Glastir, we exploited a set of models and accounting tools to project the likely impacts of management interventions for soil, water, biodiversity, climate change and woodlands.

The following set of results appears to demonstrate a positive and diverse set of actions undertaken by farmers involved in the Glastir scheme relating to climate change, diversification, efficiency and profitability.

Improving diversification and efficiency of farms

Benefits for diffuse pollution and greenhouse gas emissions at the national-scale may not be as great as intended. The GMEP results suggest a variety of reasons for this including: a) payments for maintaining interventions from past schemes reducing the additionality effect of Glastir; b) complexity of the scheme and barriers to adopting (e.g. woodland grants); and c) a relatively distributed action not always targeted in areas of greatest need (diffuse pollution interventions not aligned to high fertiliser leaching areas). Individual farm level improvements for diffuse pollution and carbon footprints can be significantly higher.

The following set of results appears to demonstrate areas of concern and/or a need for further action in the Glastir scheme:

GMEP has used the Land Utilization and Capability Indicator model (LUCI) (http://www.lucitools.org/) to map the current supply of ecosystem services at a national level, and identify where there are opportunities for improvements to the supply of these services. LUCI produces national scale maps showing where a particular service (e.g. carbon storage or broadleaved woodland) may be improved, without adversely impacting the other services. Working in partnership with local communities/farmers, the LUCI model can then be used to target management at a local level down to 5 metres scale (e.g. where to target riparian tree planting). This multi-scale capability of the LUCI model is one of the main reasons it was selected to be part of the GMEP modelling framework.
The services we explored with the LUCI model are: 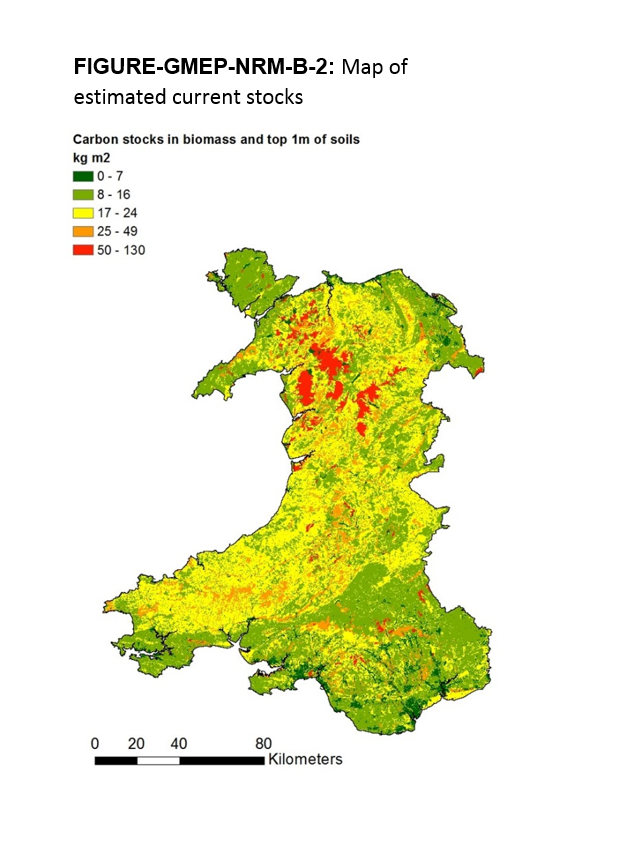 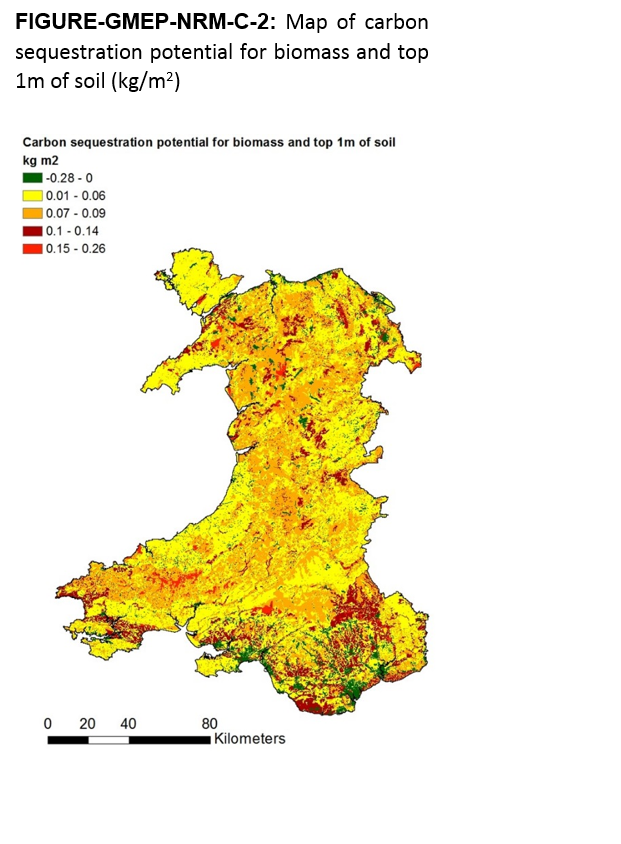 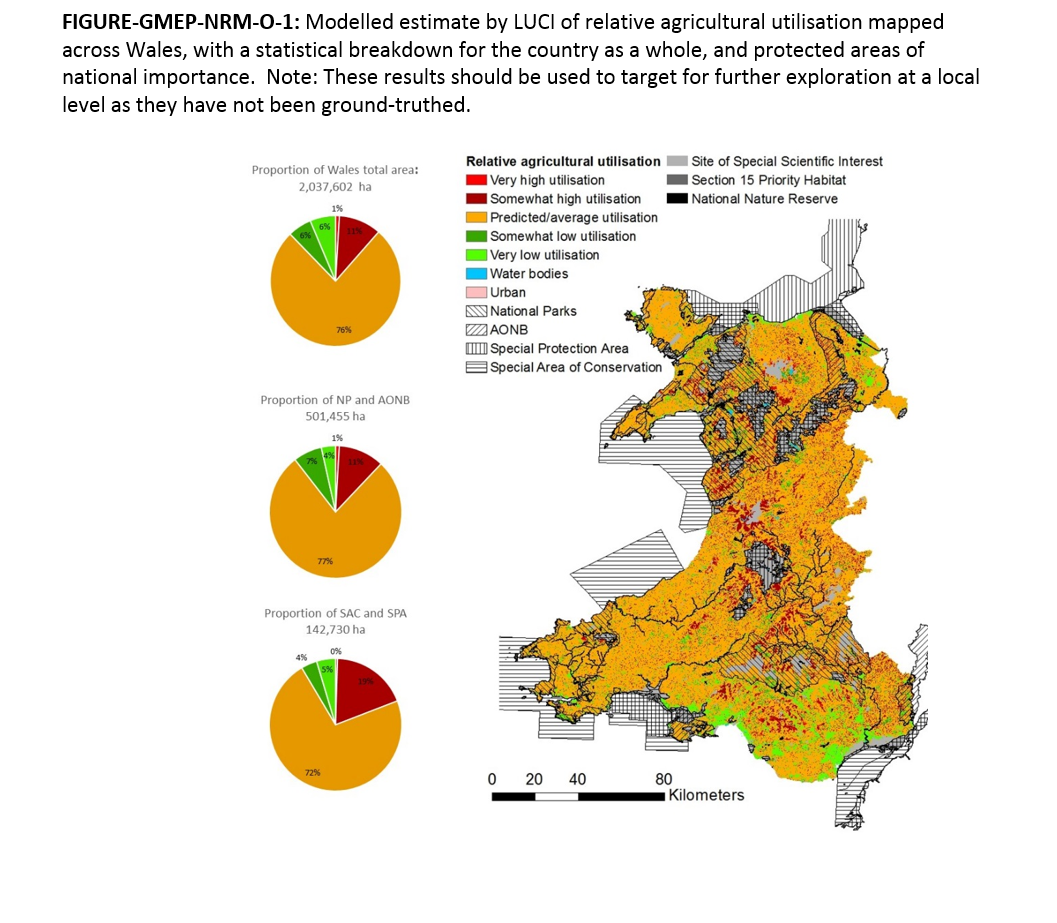 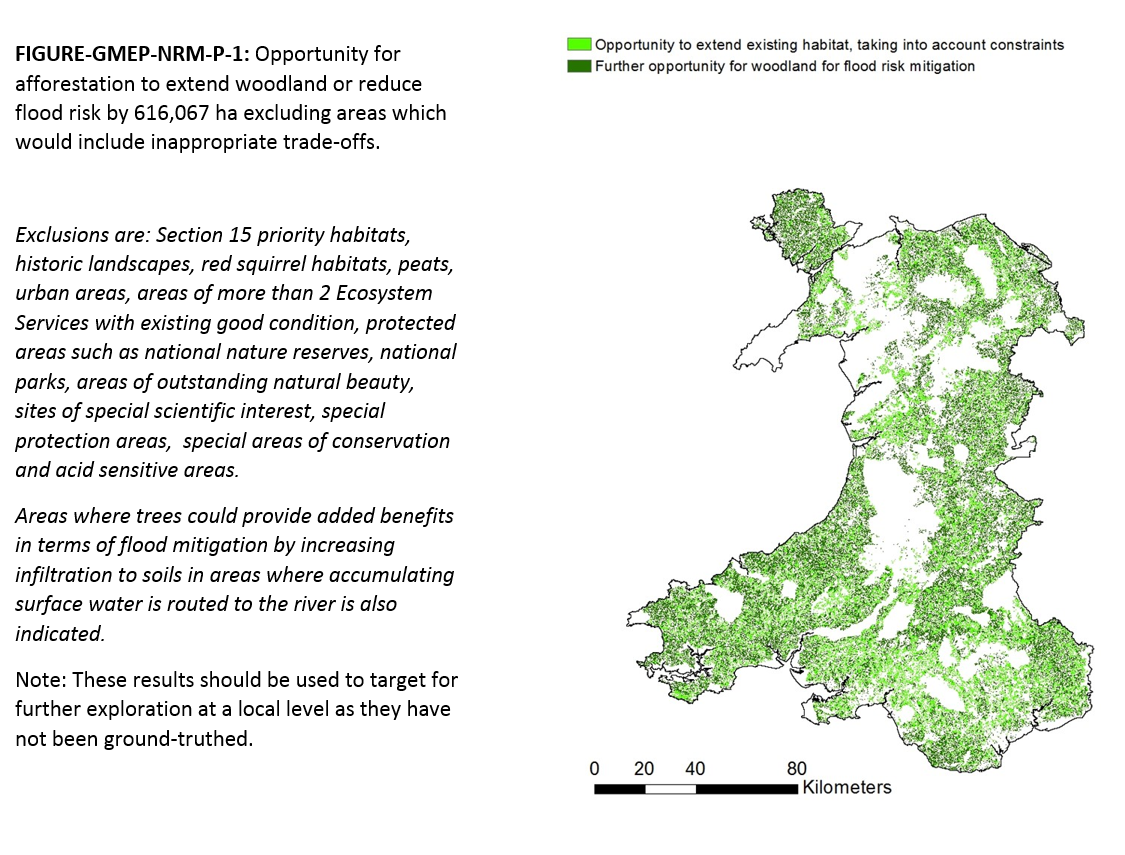 Regulation of water quality and flow 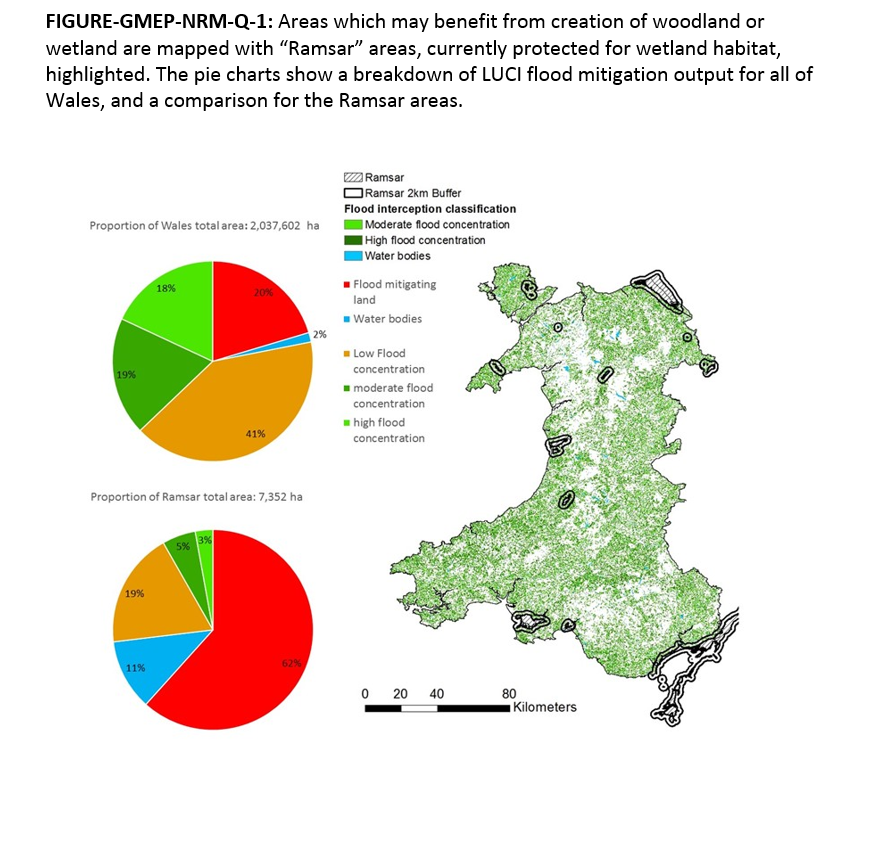 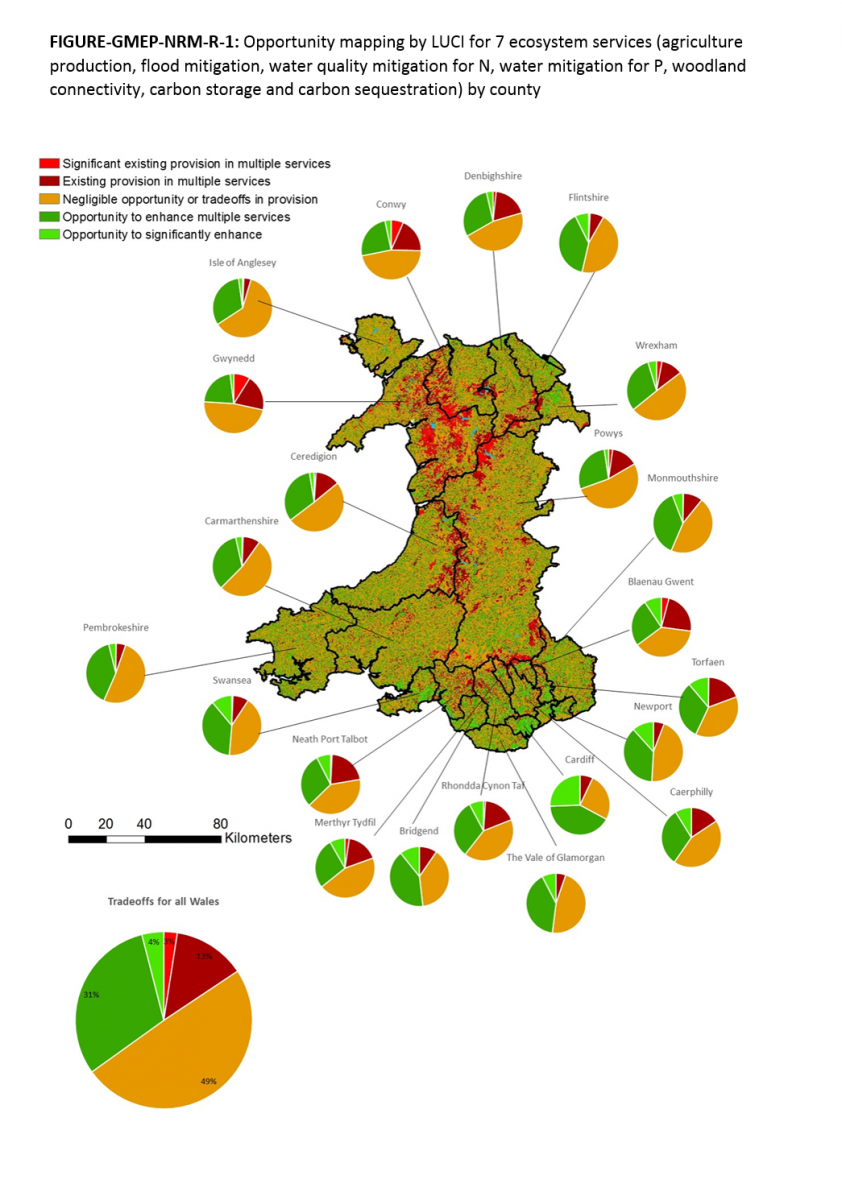 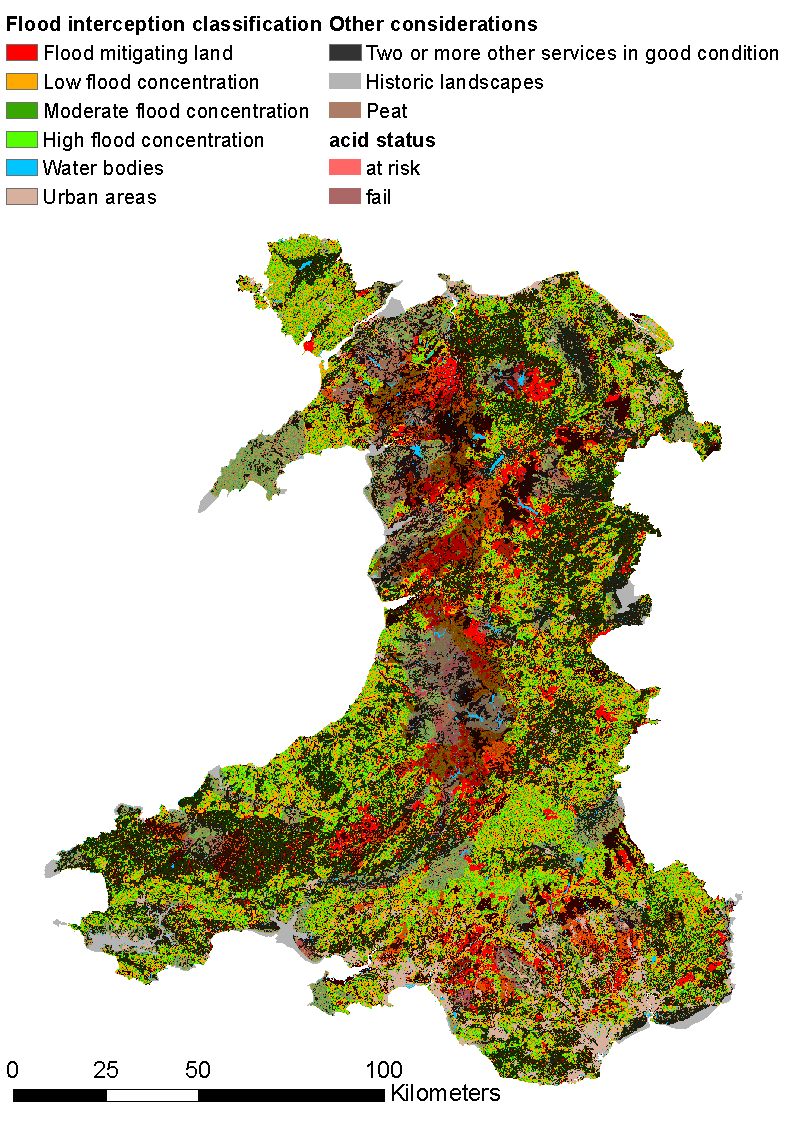 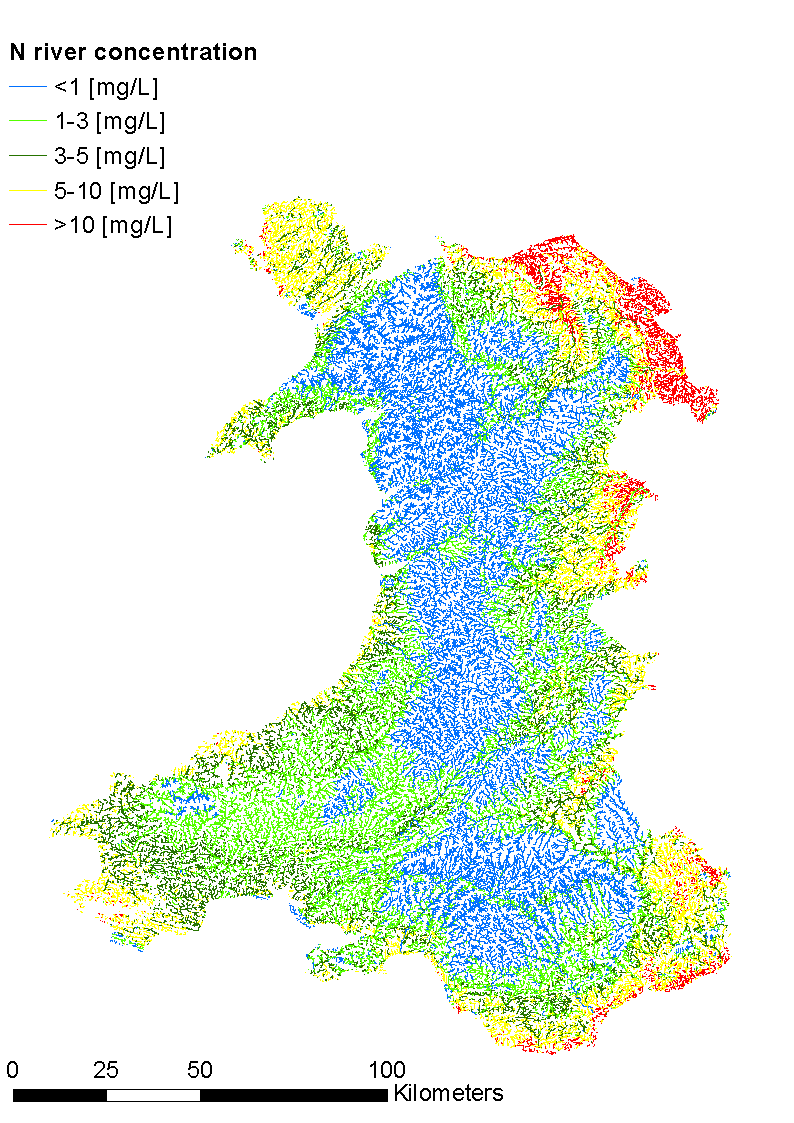 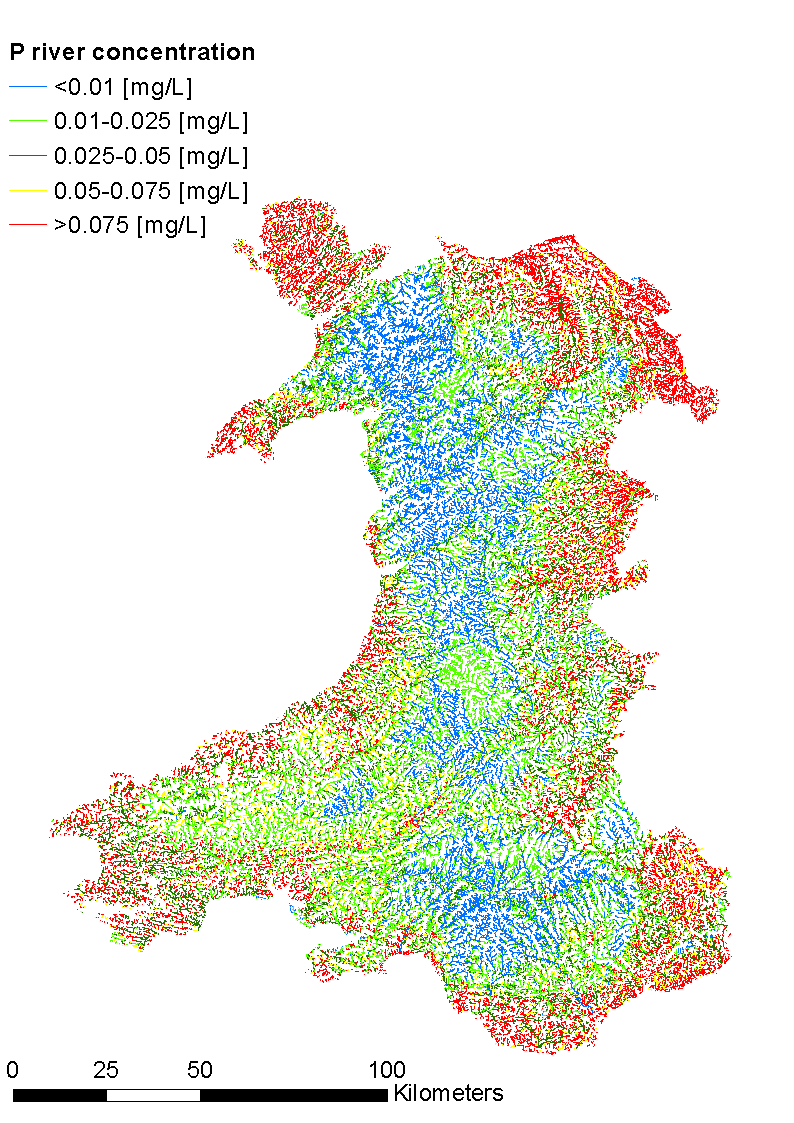 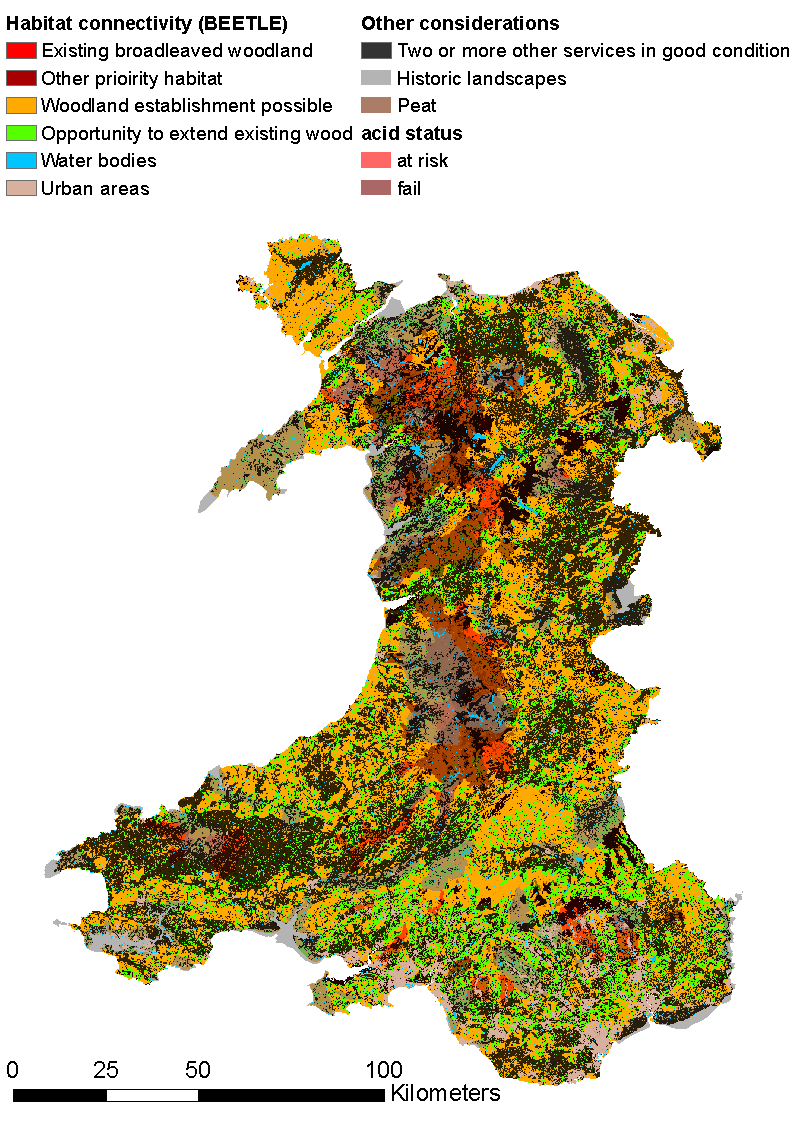 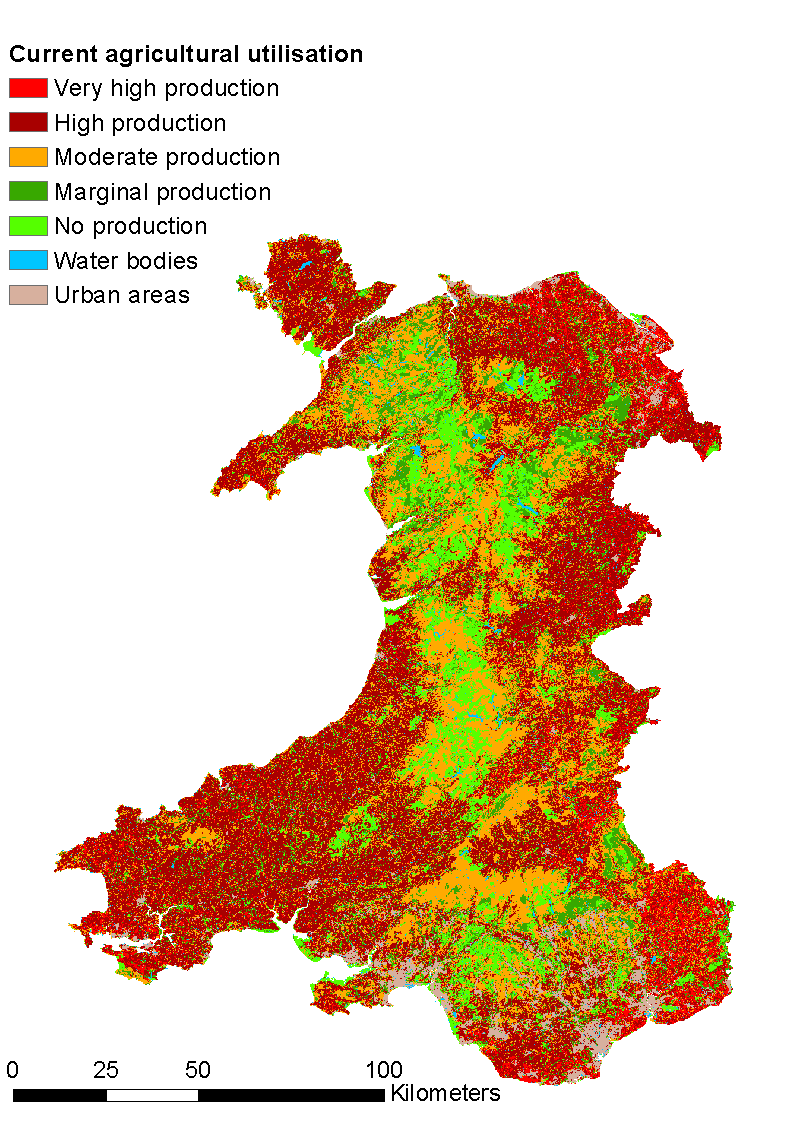 The current agriculture production based on landcover data 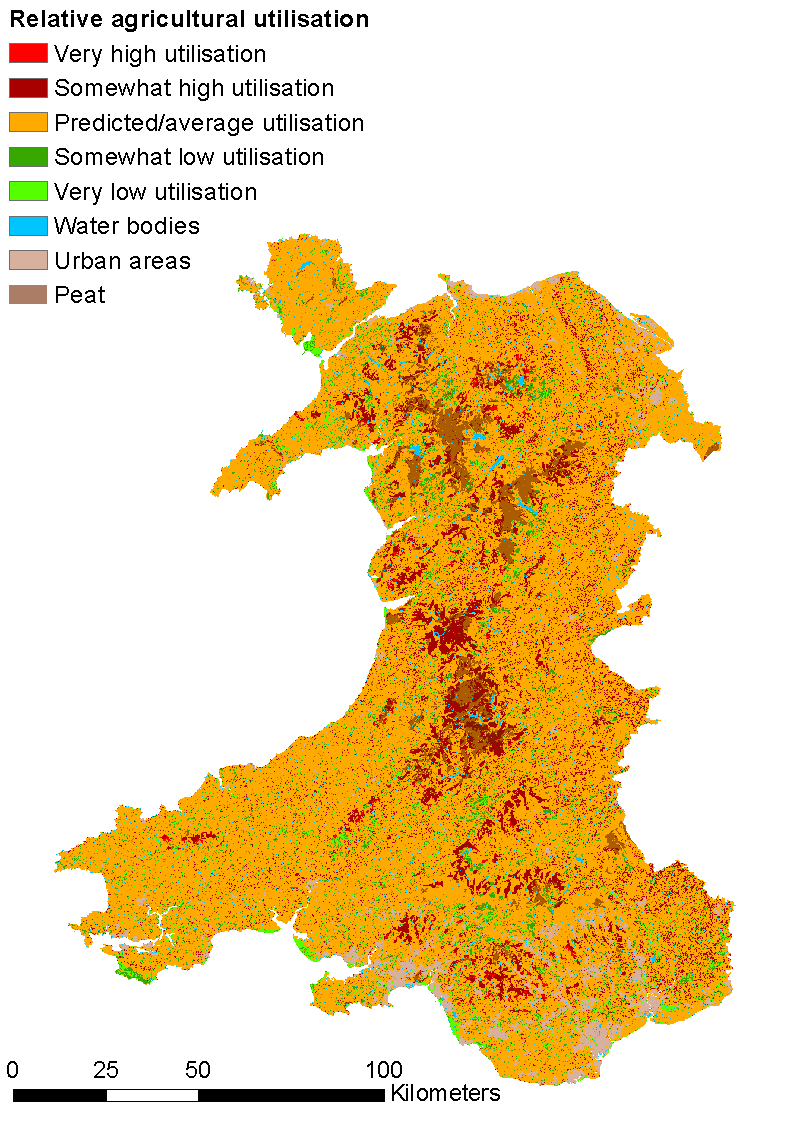 The utilisation of land for agriculture production relative to its production potential based on landcover, soil and slope condition 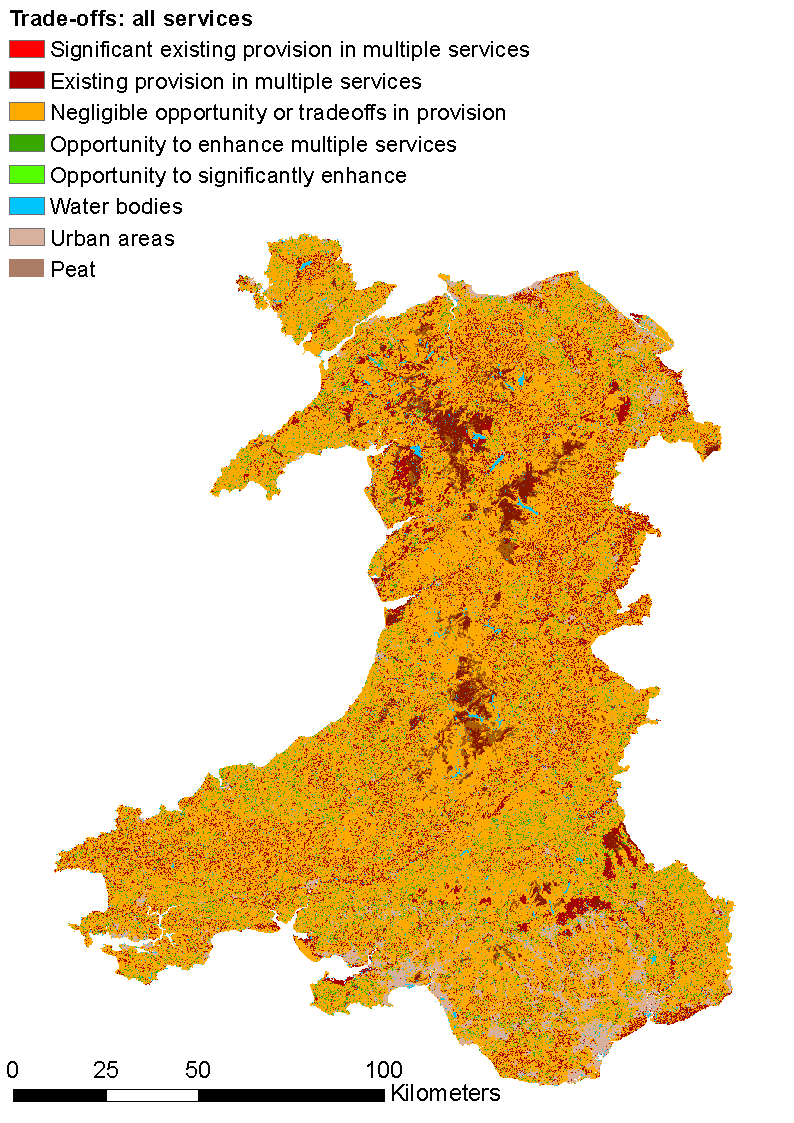 Map showing the large area of Wales (77%) where extending one service will impact on another. The map emphasises the need to prioritise services locally as trade-offs are inevitable.

If you have a question or want to be kept up to date with developments within GMEP you can contact us through the GMEP Project Office.